I went out of town for a month or so there, but now I’m back and building the canoe again (at least when the weather isn’t conducive to windsurfing).

As mentioned previously, I decided to install the inwales before working on the outside of the hull. I also saw a canoe where the inwales butt up against the breasthooks, which sounded way easier than fitting the gunwales up to the fillets at the ends.

I had some mahogany left over from a previous project, which I decided to make use of for the breasthooks. My wife suggested adding a strip of cypress to the middle to match the gunwales. I made a cardboard template, then cut and glued a rough blank. 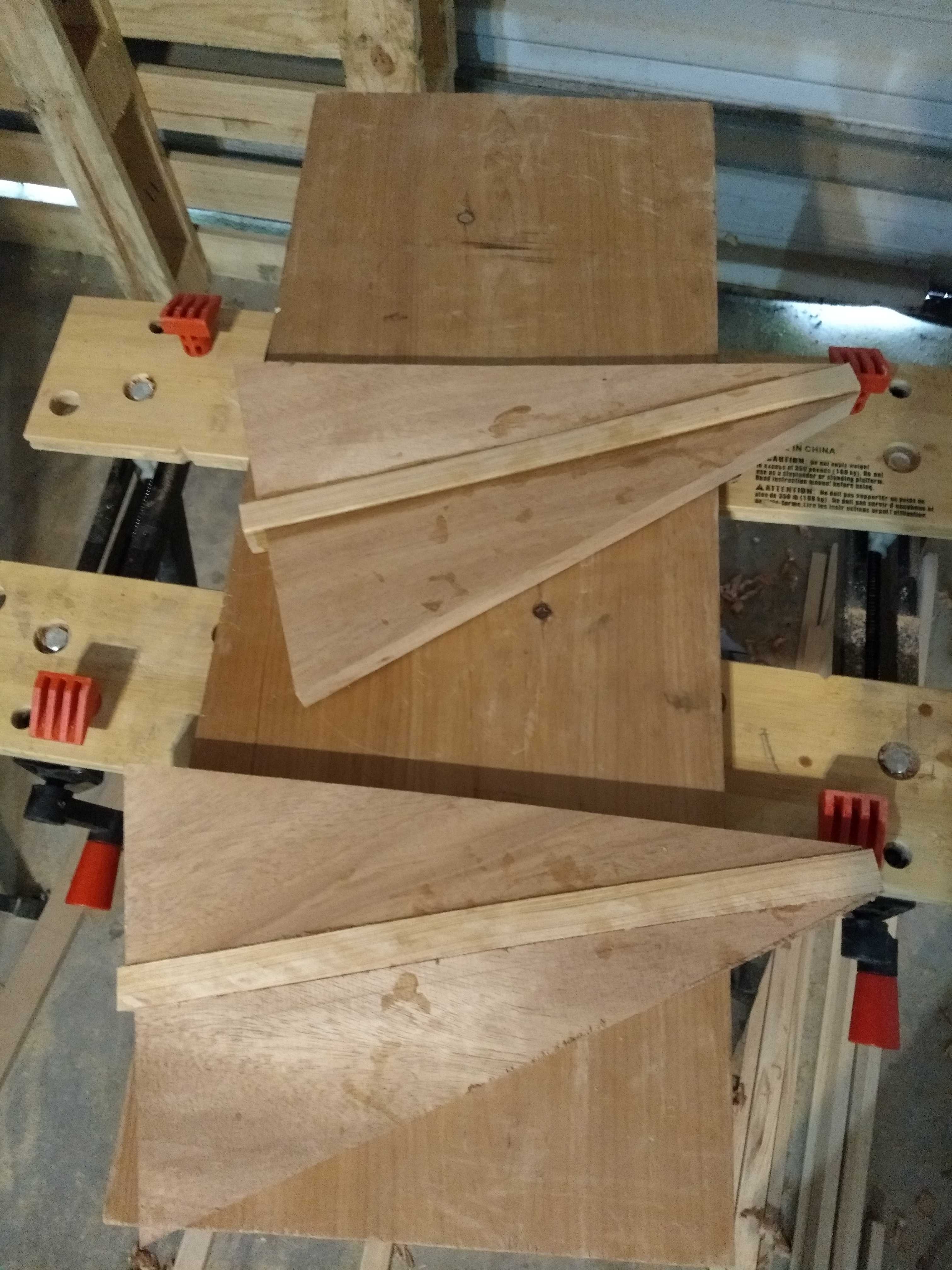 Here’s what they look like after some cleanup and test fitting. I traced the lip of a flowerpot to get the curve for the grip, then cut it out with a jigsaw. I used a spokeshave and smoothing plane to shape the outside. 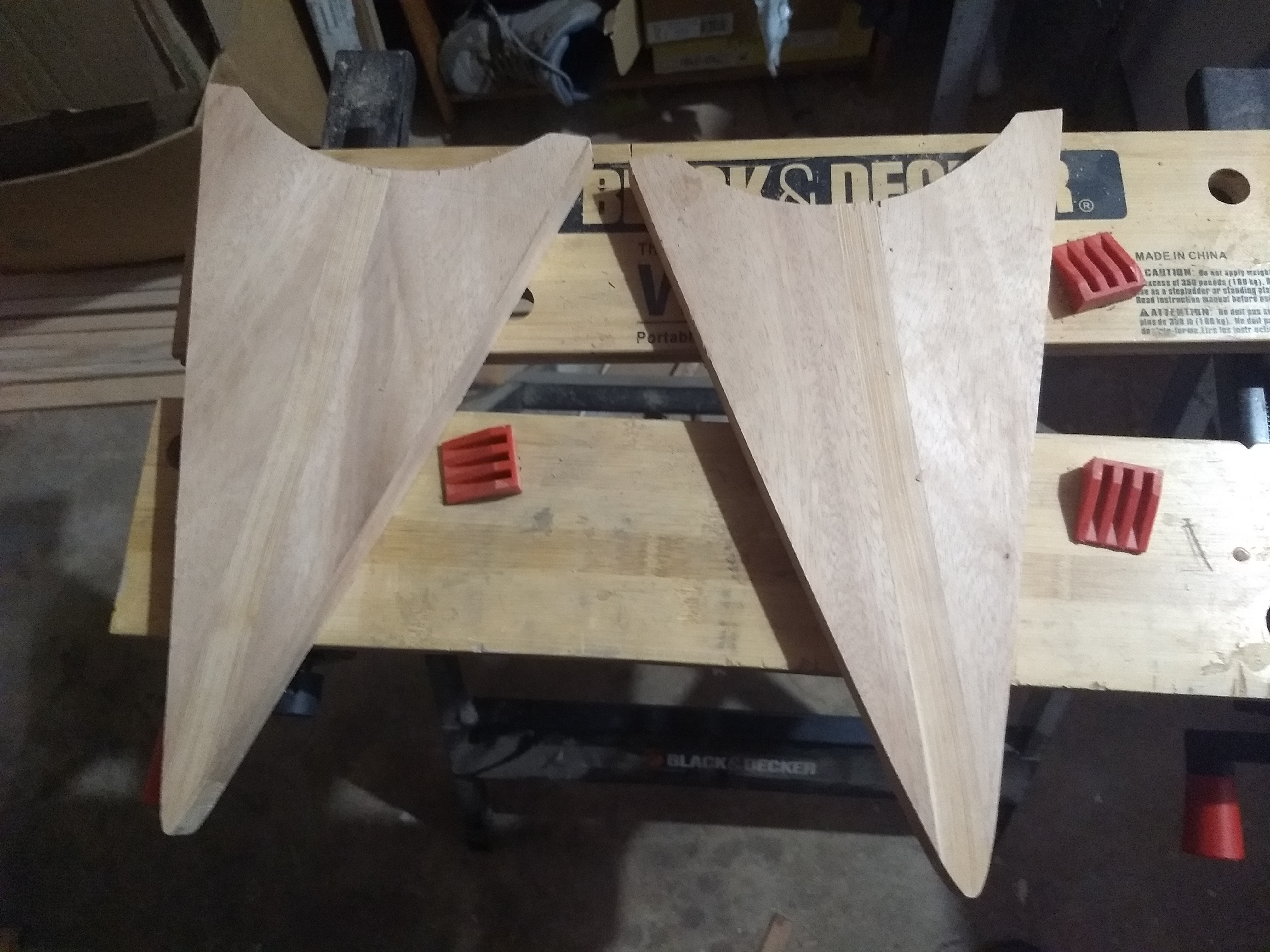 The gunwales are made from cypress, and I had the lumber store rip them to size for me, but later decided they needed to be substantially smaller if I had any chance of bending them. I don’t have a table saw, so I tried getting a rip guide for my circular saw and using that. Since I don’t have a 16 foot long workbench (or a workbench at all, for that matter), I tried ripping a cypress batten by crawling along the floor with a circular saw. This did not work out - I think I would’ve had better luck freehand following a line. My mom saved the day by bringing me her table saw to borrow for the weekend, and I got the cuts I needed.

I cut a taper out of the lower edge of the inwales so they’d make the bend. This time I just marked the line and cut it with a circular saw and a few passes with my smoothing plane. 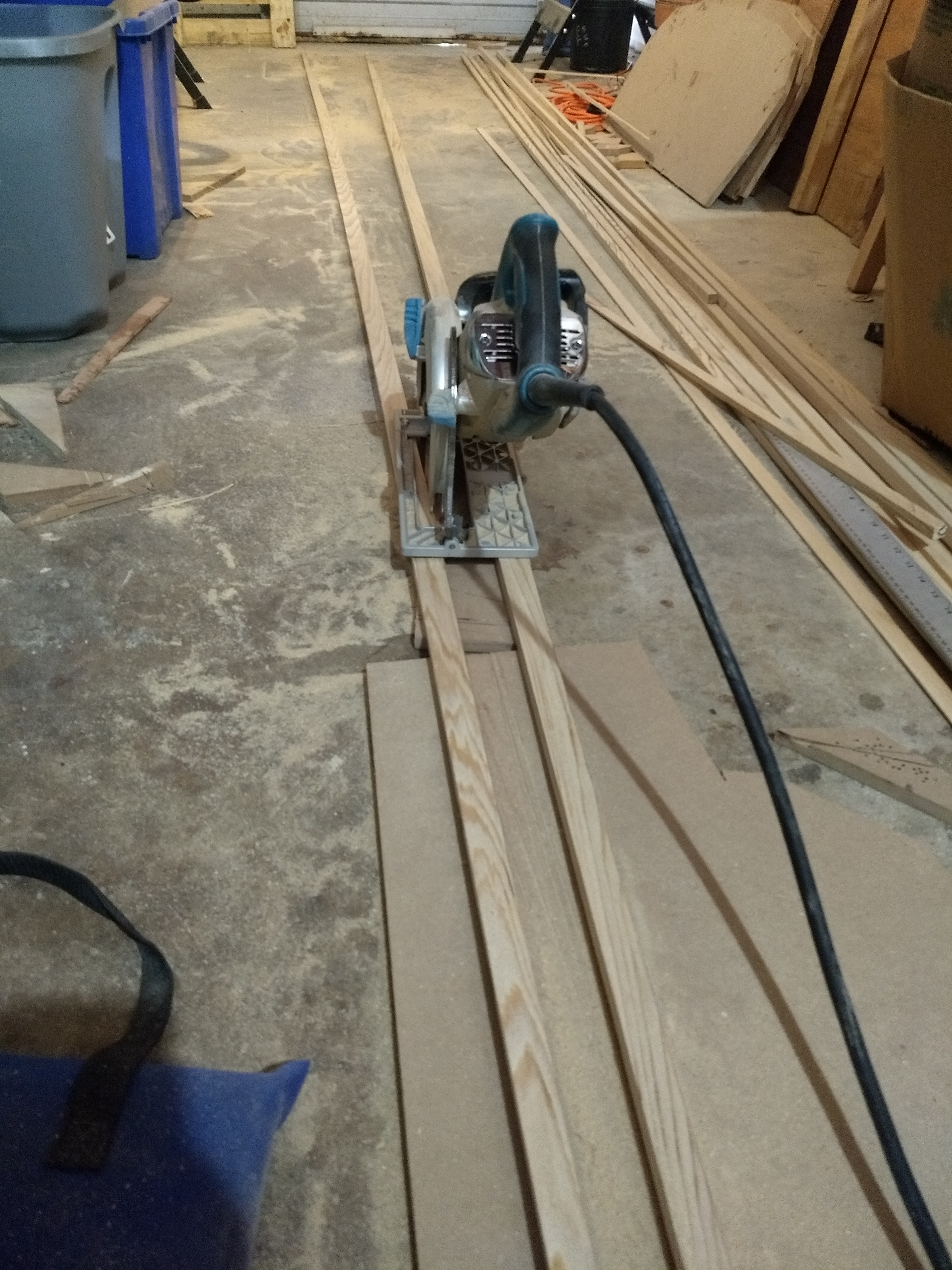 Apparently you can never have enough clamps. I had a hell of a time getting the bend I needed when dry fitting the starboard inwale, so decided not to bring it quite to the top at the ends, which would also make it easier to get a reasonable looking curve that includes the breasthooks.

This picture also gives a good view of the cockamamie port rim that I wanted to fix. 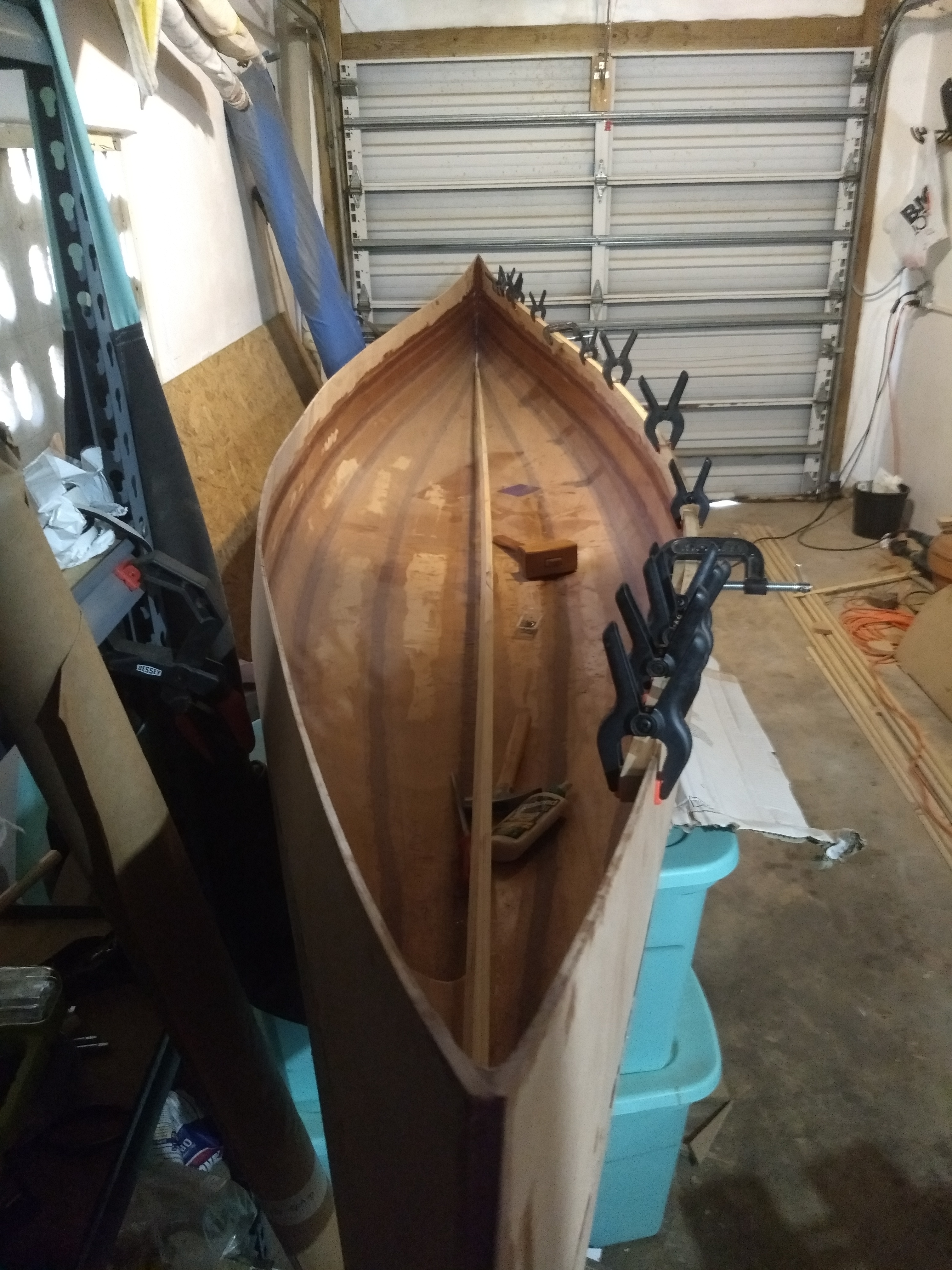 On a run to the hardware store for more glue, I saw they had nice spring clamps for $1 each, so I picked up like a dozen, plus a couple more screw clamps. This made fitting the port inwale much easier, and I realize I totally could’ve made that curve. The plastic clamps are garbage, but I like the coated metal ones in the pic. I was also very happy to have a few screw clamps in the equation to really secure things while I forced the bend. 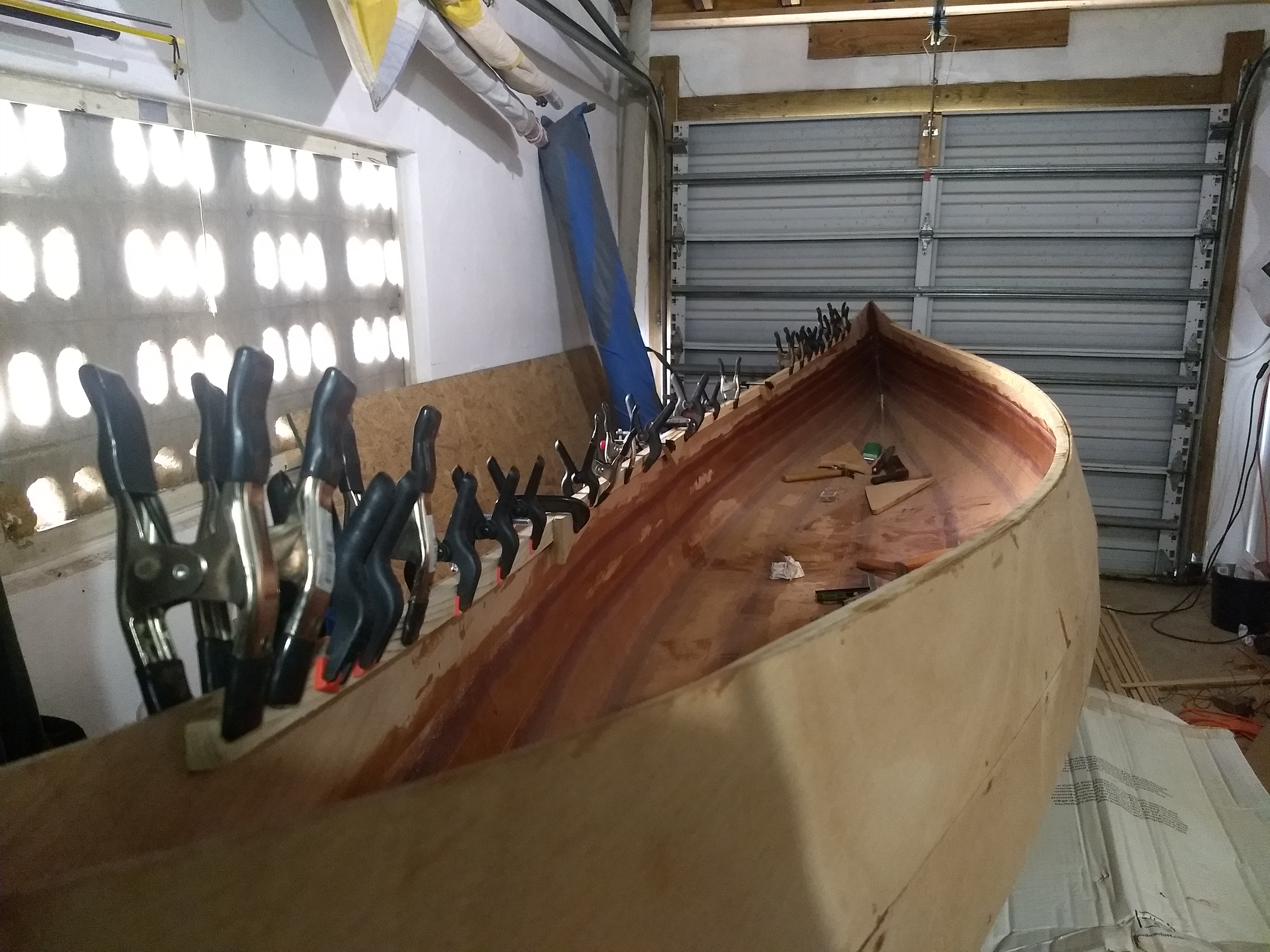 The port inwale did give me another kind of trouble though - I glued the wrong side, but I figured it was no big deal, I’d just flip it around and put it on that way. However, I’d cut the ends at an angle to fit nicely against the breasthooks, so I had to cut off the last bit, and now I have a gap to fill.

Since the breasthooks will also serve as a grip, I rounded over both sides of the arc with a router before installing it. 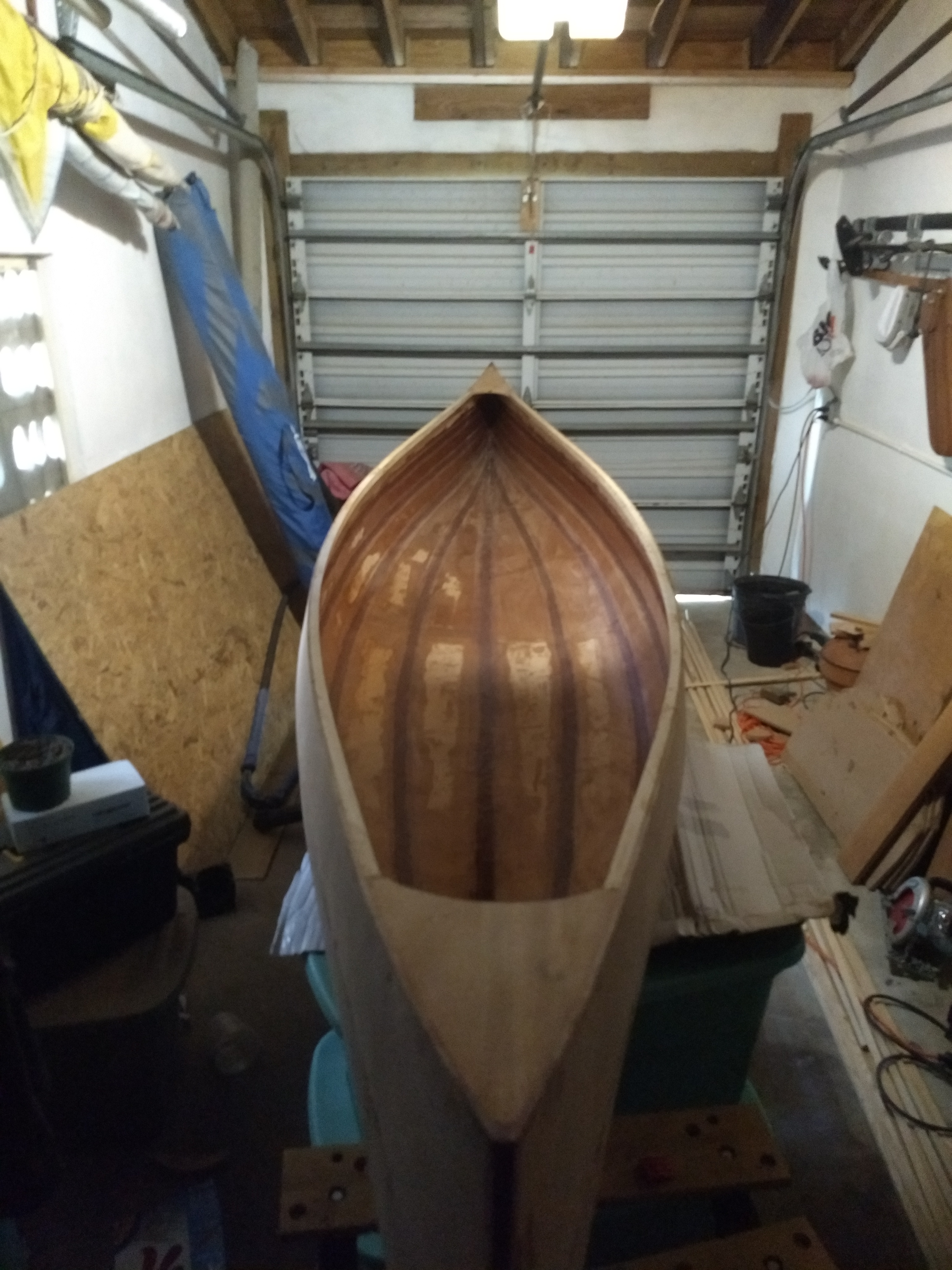 Take a look at that in comparison to before I’d installed the inwales. What a difference that makes in getting a fair curve. Very happy to have done this before glassing the outside. 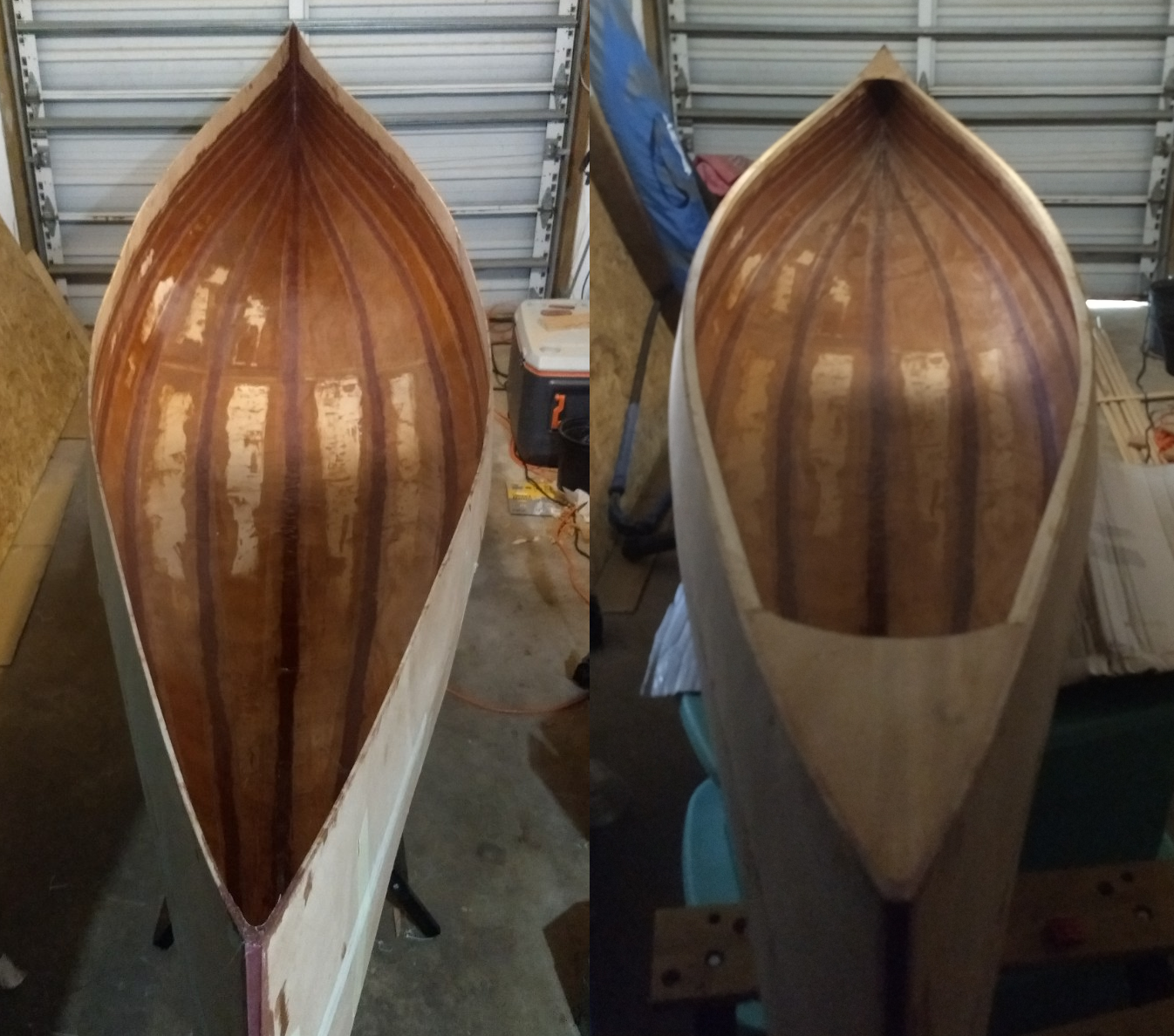 Somewhere around this time I also shaped a thwart out of some cypress. I love the grain on this wood, can’t wait to see what it looks like varnished. This canoe has two thwarts, but I’m gonna make a yoke for the primary one. 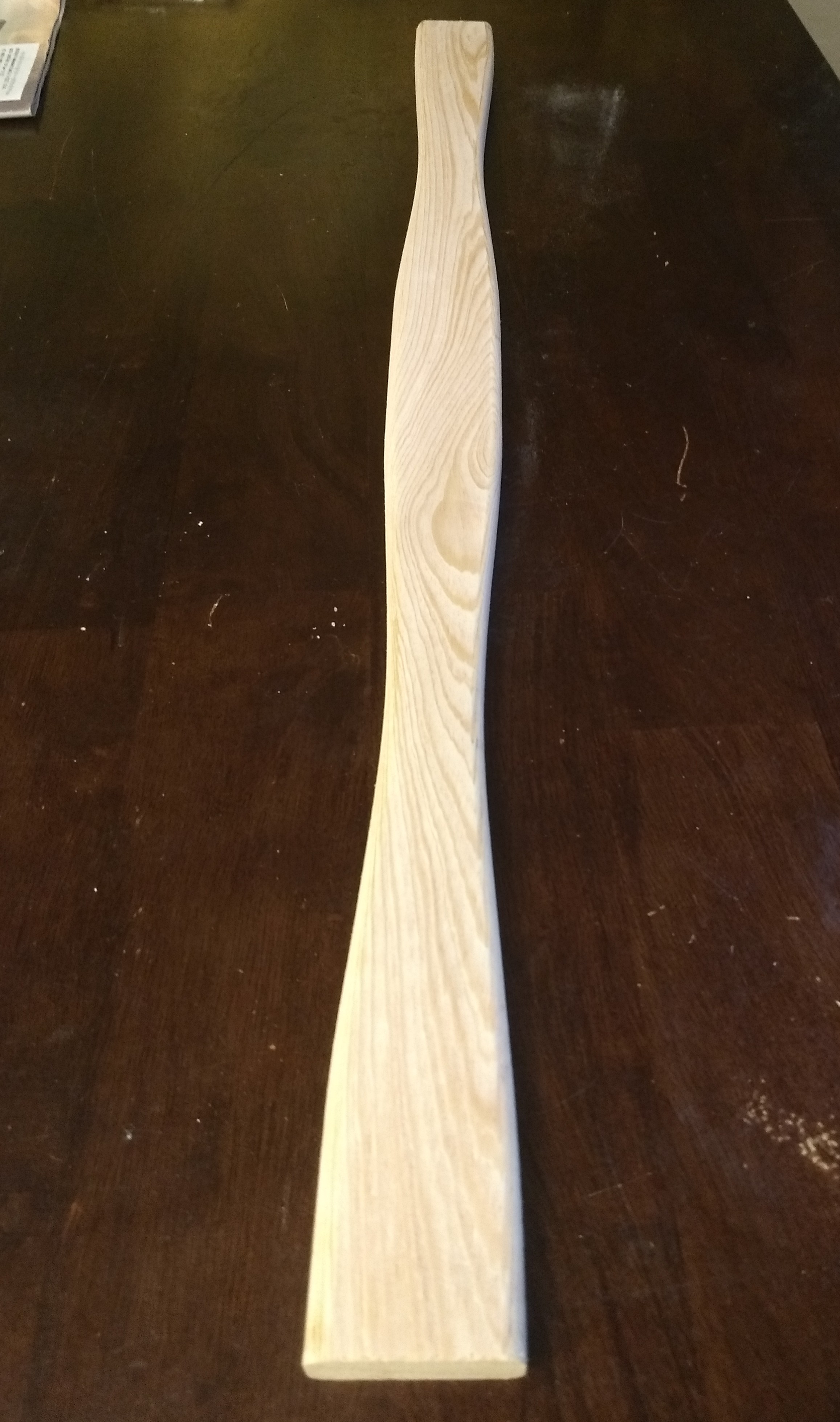 A day or so later I flipped the hull. What a sight! 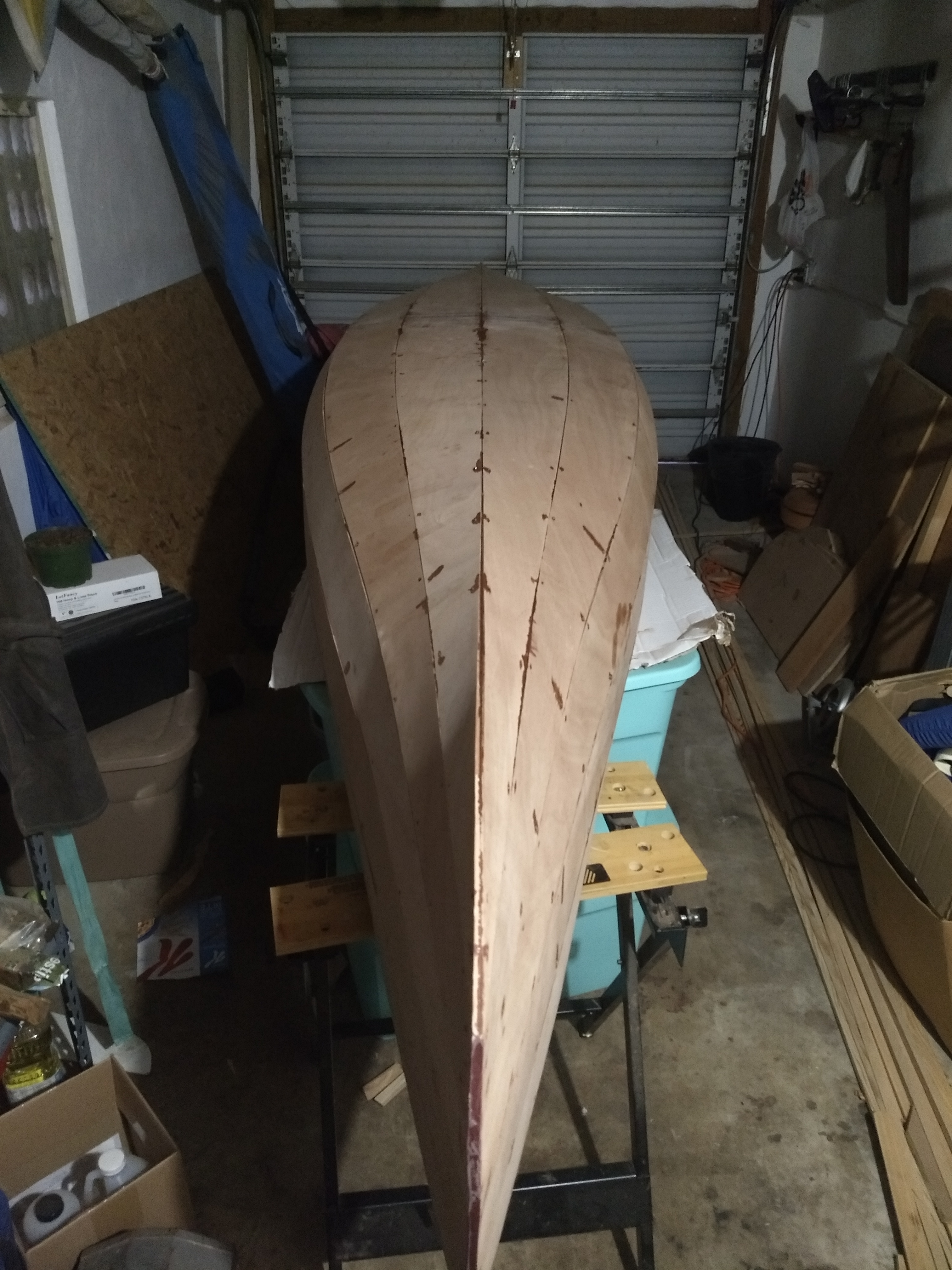