Time to finish the gunnels! First I sanded the top edge of the canoe to make some teeth to adhere to, then I dry-fit the outwales and marked just below the lower edge with some painters tape to catch any drips.

This time around I used a healthy amount of epoxy thickened with cabosil as the adhesive. Everything was a bit slippery, so clamping was somewhat tricky. 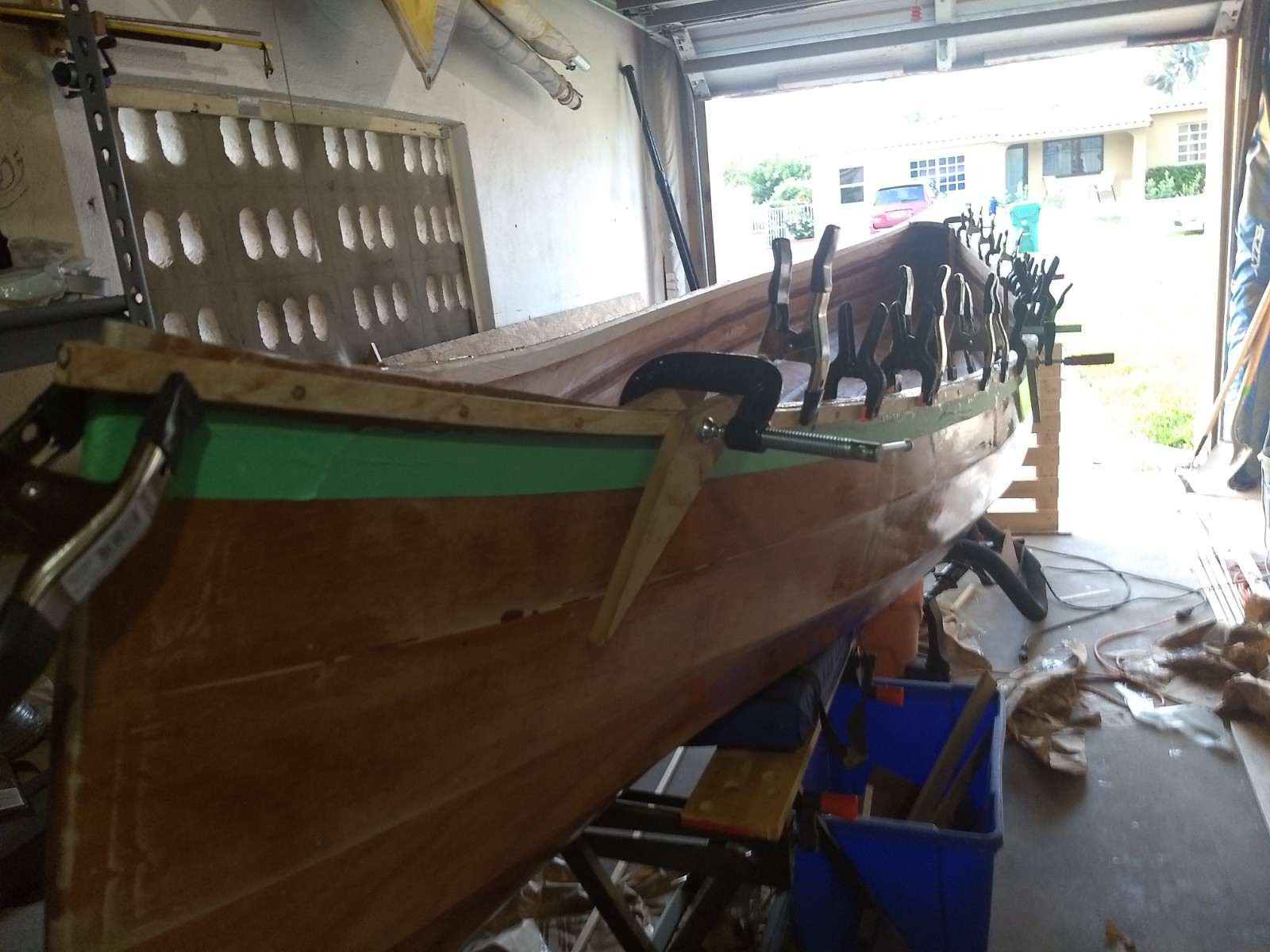 I used silicone bronze ring nails as mechanical fasteners to backup the epoxy. Probably not necessary with modern adhesives, but whatever, it looks pretty. I was terrified of splitting the wood, so I pre-drilled holes every 20cm. The vibrations from hammering shook the clamps and caused some sections to shift. The cheap plastic harbor freight clamps actually popped off a few times. The jostling of the clamps also caused some minor damage to the gunnels, as they slipped and squeezed on the fragile corners.

Here’s the port outwale. You can also see how much of the breasthooks extend above the trim line. 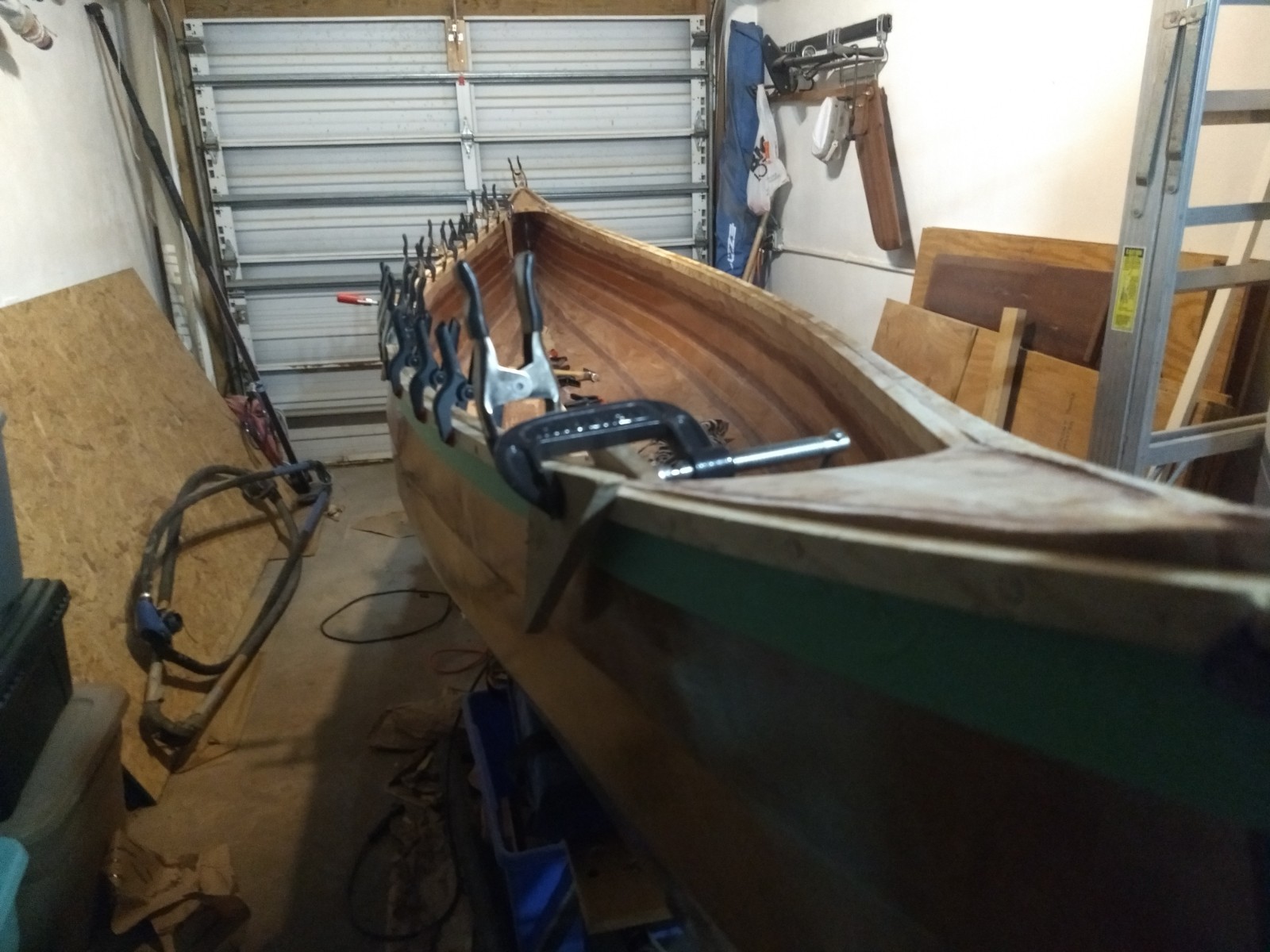 After that all set, I sanded the edges down to even. I did a pretty good job lining the gunnels with the edges (except towards the ends, where I knew I’d be trimming it).

I used a belt sander for the bulk of the work in shaping the breasthooks, which was pretty effective. I shaped the ends of the gunnels with a couple rasps and a file. If you’ve never used a saw rasp - those things are great, they remove a ton of material. 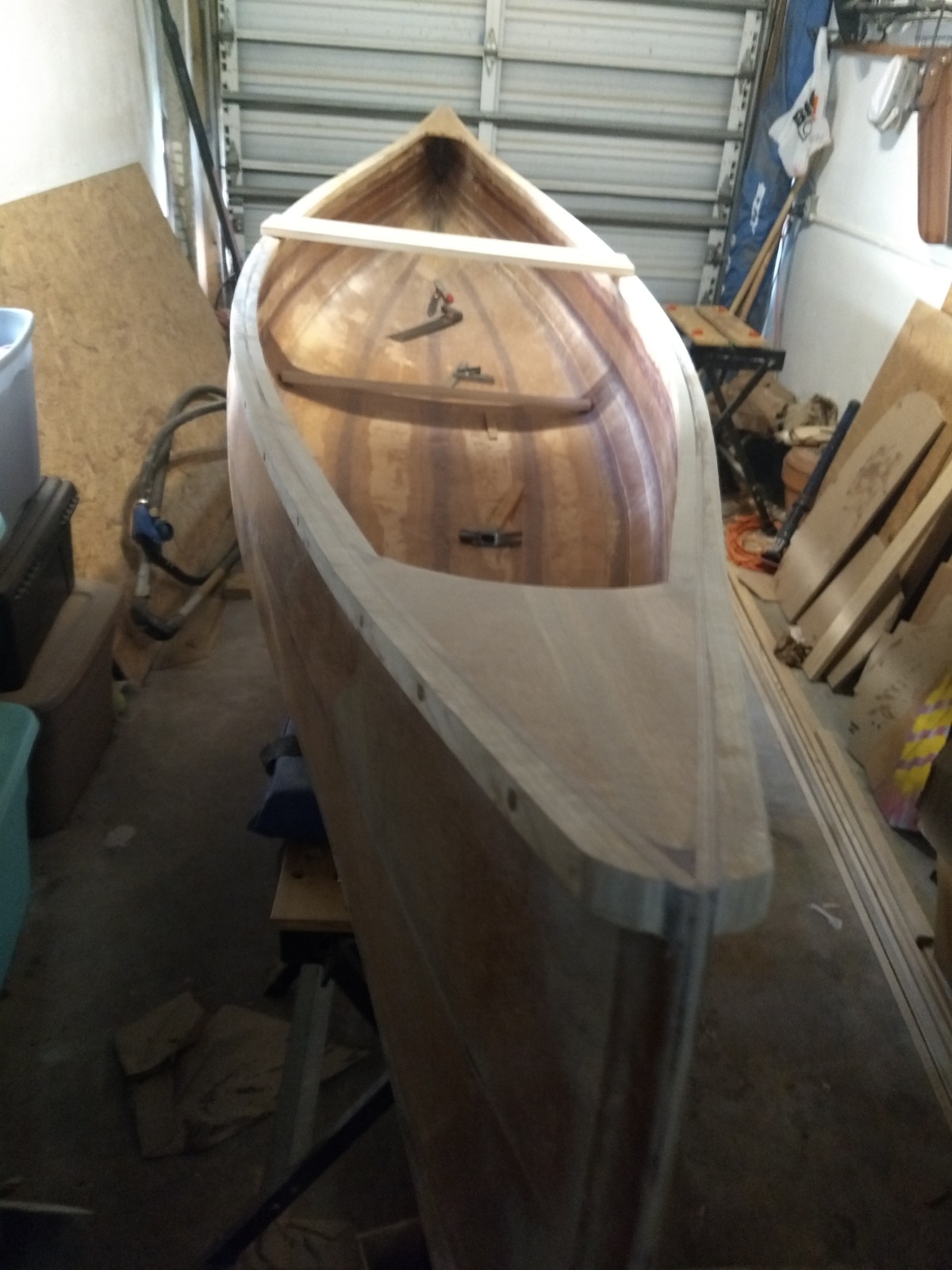 Next I took the canoe outside so I could sit in it and clean up the inwales. I drove some more ring nails in from that side too, particularly since I’d done such a poor job gluing the inwales in the first place, but also because it’ll look nice. 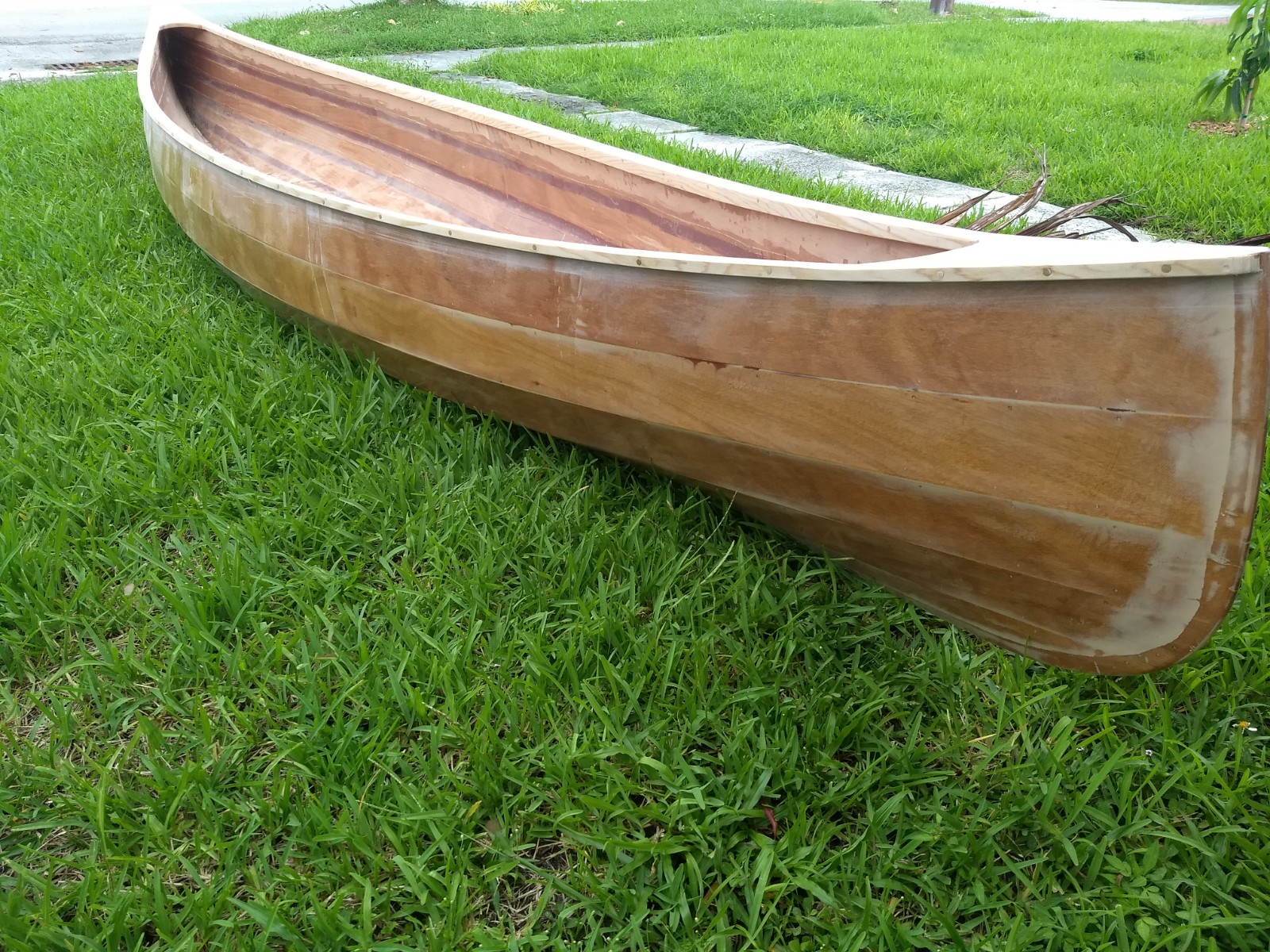 I decided to seal the gunnels and breasthooks at this stage to better protect them against any accidental damage during the rest of the construction.

After sanding everything down to 220 and clearing off as much dust as I could. I brushed on a thin coat of epoxy, then came back a few hours later and did another. 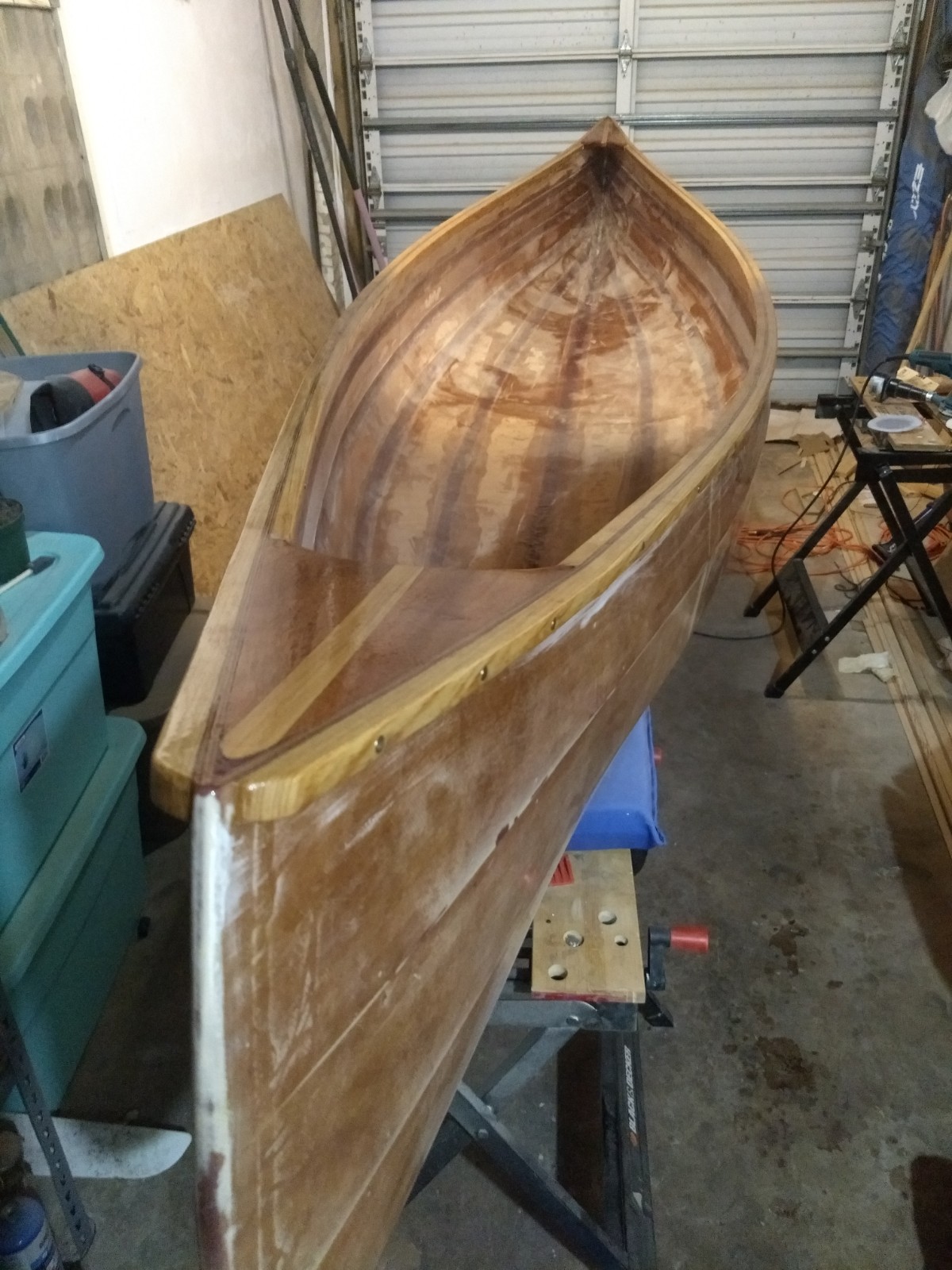