The maiden voyage of my canoe was on the Rainbow and Withlacoochee rivers in central Florida. Drove 5 hours with it on the roof of the car, which was a bit nerve wracking, but uneventful. 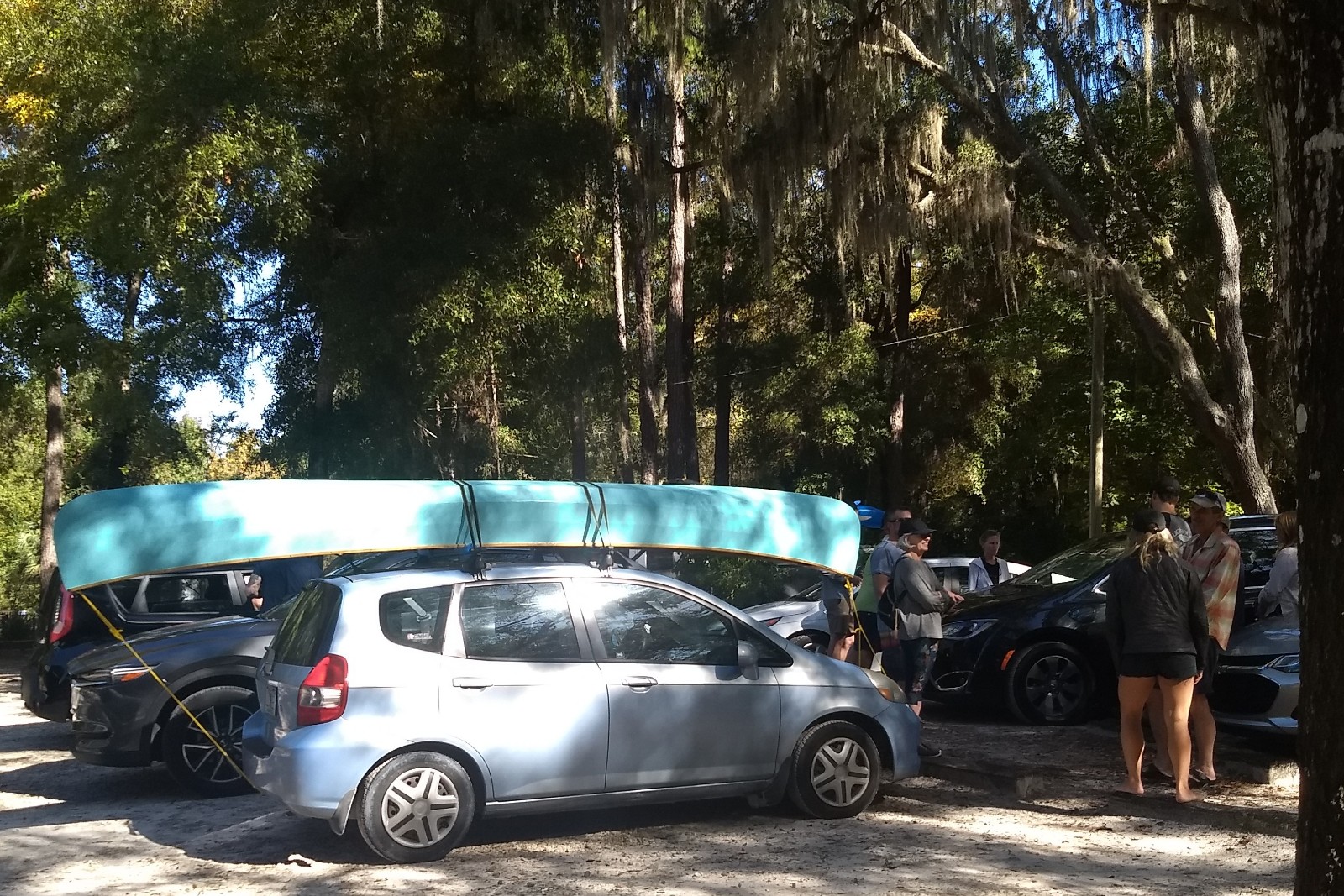 Trying it out. It floats! (the idea of there being a hole in this thing that I haven’t seen by now is pretty absurd, considering the amount of time I’ve spent with each square inch) 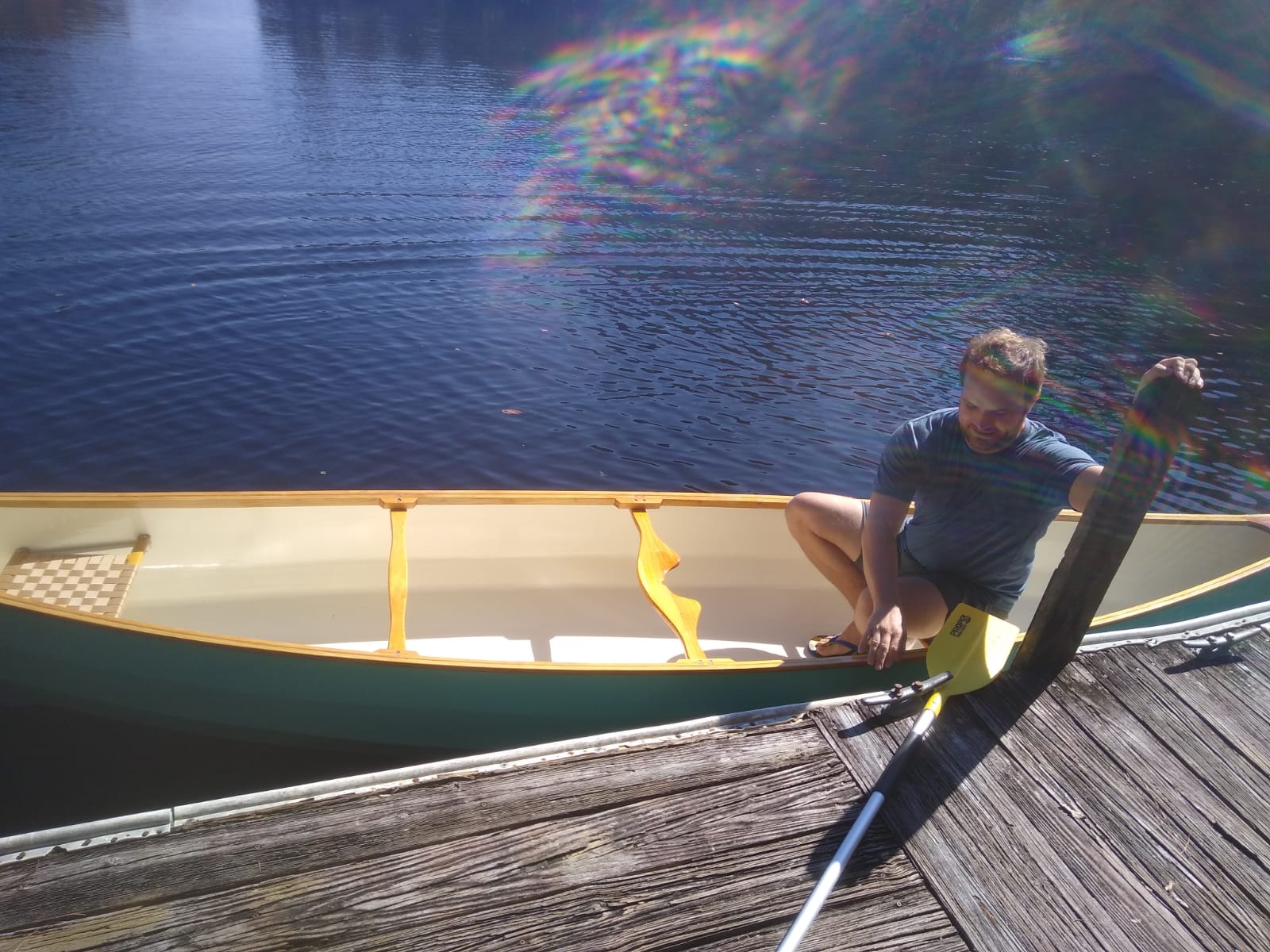 I’ve spent a lot of time in canoes, and consider myself fairly experienced. However almost all of that time has been in rental canoes (I have tried out solo canoes and whitewater canoes a handful of times). The canoes you see at outfitters seem to all be of about the same design. When I started researching canoes for this project, I was a little surprised to see the variation in designs available.

My canoe is a 15’8 Fisher Prospector, with 5 boards per side. This design has a “well rockered keel line”, which makes it especially maneuverable. I can attest to that after having paddled it; it feels very natural to control - I can turn fast, or hold a straight line without much effort.

Interestingly, there’s a lot more taper in the ends than in your typical rental canoe. That coupled with the rocker means that it’s fairly sensitive to fore-aft weight distribution (there’s a lot of volume held low in the middle). With two people of similar weights and no gear, the bow sits noticeably higher than the stern. I typically sit at the stern, with my wife at the bow, making the lean even more apparent. Not sure whether it impacts paddling much though.

I’ll likely need to redo the seat attachments to make them stronger (I’ll hang them from the gunnels, as is more typical), and I may take that opportunity to adjust the balance a bit. There’s not a lot of leg room for the front seat as placed on the plans, so I’ll probably move both a bit towards the center. 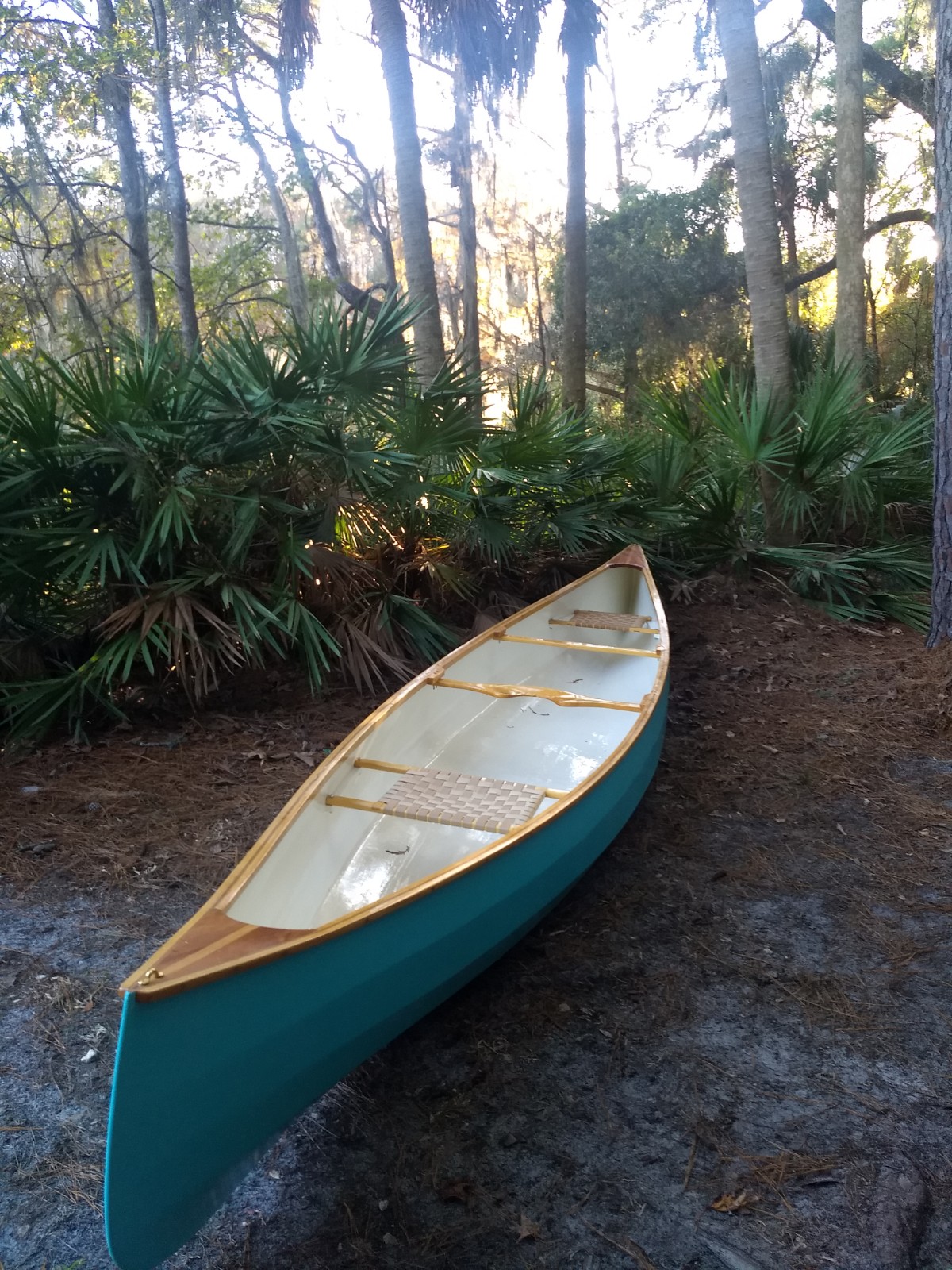 I picked this canoe because I wanted something suitable for day trips with three people aboard or multi-day stuff with two people and gear. The canoe is moderately wide, and has some tumblehome (the top pinches inwards a bit) to accommodate that width without interfering with the paddles. It does feel like there’s significant reserve stability - as I lean to one side, I can feel the buoyancy pushing back, such that it’d be hard to tip over by accident. I was able to climb into the canoe from the water without swamping it. 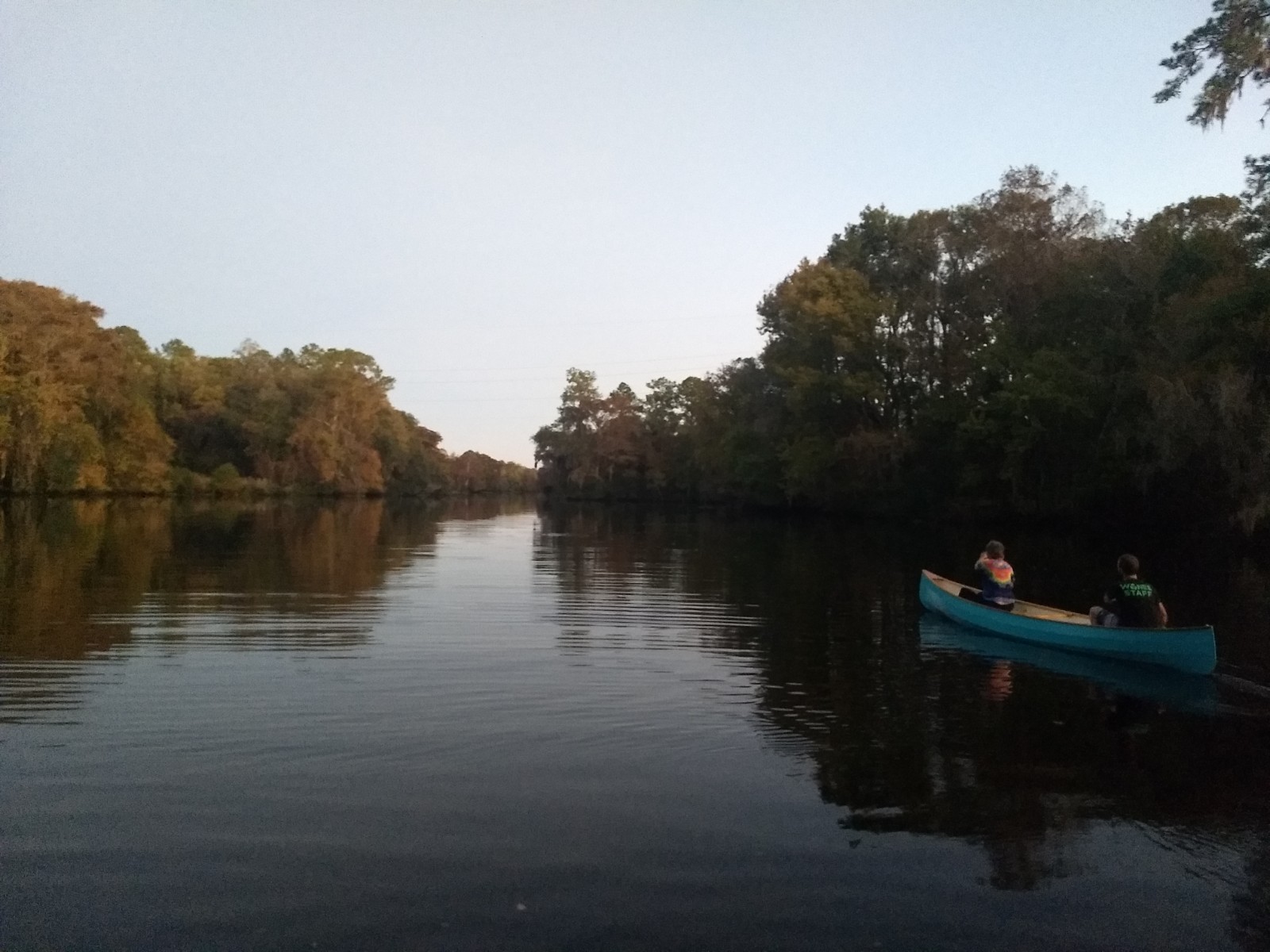 The yoke is far more comfortable than a straight bar, but it’s still hard wood on your shoulders with decent bit of weight behind it. It’s better than carrying it on your neck, but if I had to portage a quarter mile, I’d want some padding.

My favorite photo comes courtesy of my brother. This is me lowering it off my shoulders into the water for the first time. 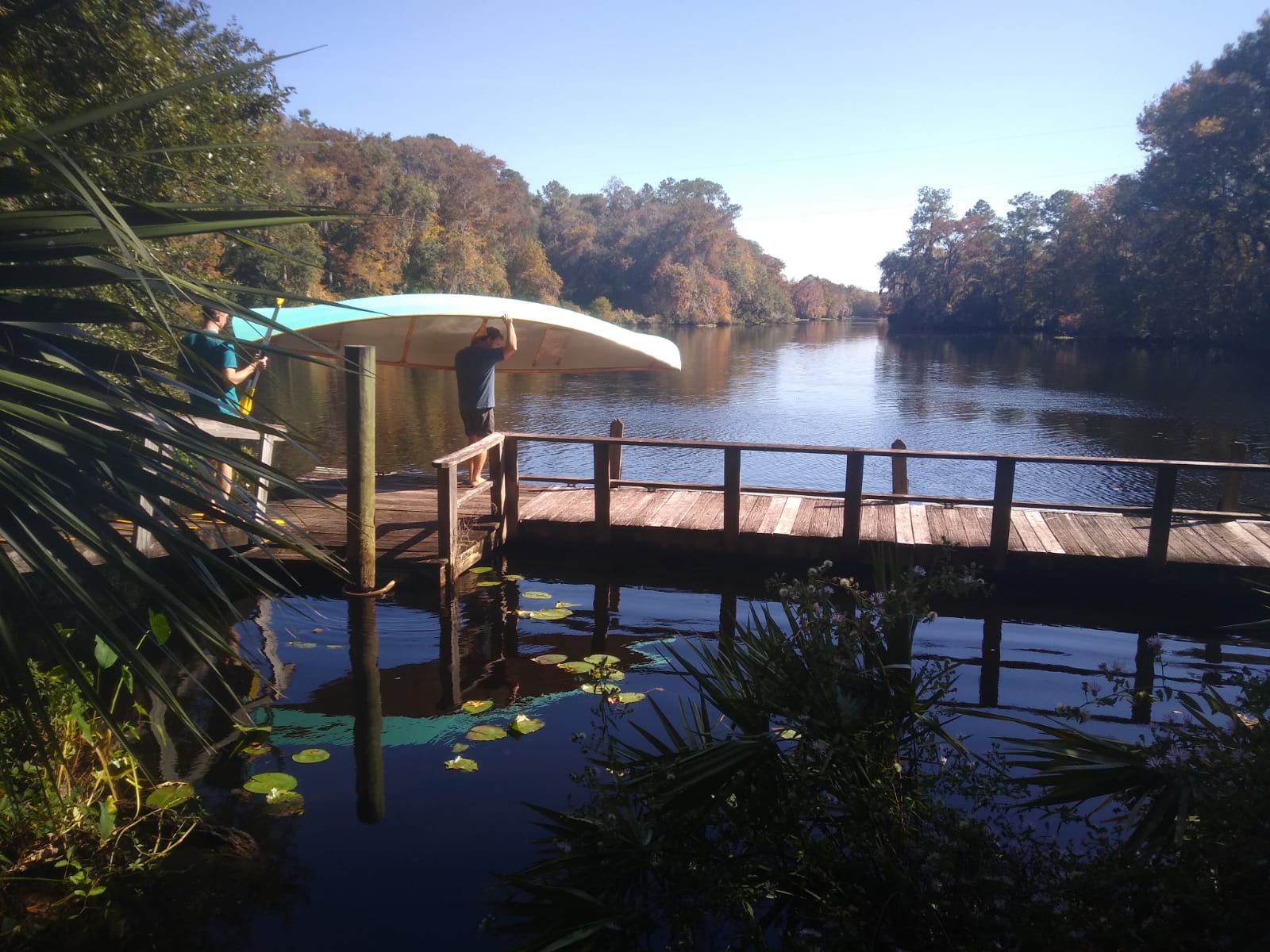