Following up on the success of my marking knife, I started work on a paring knife. Actually a pair of them, that I ended up giving as wedding presents to some friends.

I wanted to use high carbon steel - that’s what old-school French chef’s knives are made out of; it’ll rust if you let it, but it usually holds a nice edge, and develops character over time, as a patina forms. That’s a catch-all term for a category of steels, and after some research, 1084 sounded like the stuff to get. It makes a nice edge, and is supposed to be easy to heat treat. Some (most?) steels require very complex processing that can’t realistically be done without a specialized, temperature controlled forge.

This stuff isn’t that easy to come across, even online - I found a reputable dealer called New Jersey Steel Baron that sells 1084 steel. They were out of stock though, so I wrote a little script to check each size I was interested in to see if it was back in stock. Then I ran this every now and again until they had some. Since I was already paying for shipping, I also picked up some O1, which is a stainless “tool steel” that many people use for knives. Might use that to make a camping or fishing knife at some point. You can only buy 48” bars, so I guess I’ll have extra of each.

I shaped these knives out of a thin bar of steel, 1/8” thick. That’s still thicker than I’d like for a paring knife, so I ended up grinding it thinner. People typically forge these things, meaning you can hammer the steel thinner and wider than your raw stock, or forge-weld several bars together. Since I’m shaping strictly by removing material, I had to start with something fairly close to the final thickness.

I drew out the shape I wanted in sharpie directly on the steel stock. You can’t really cut a curved line with a flat cutting disc, and it takes forever to grind this steel down. I made a bunch of cuts from the edge up to the line using a cutting disc on my angle grinder, making sort of teeth. Then I went in from the side and cut off the teeth one by one to try to get as close as I could. Then I went in with a grinding disc and smoothed it all out and brought it down to the line. Unfortunately I seem to have neglected to take pictures of any of this.

At some point in there I drilled holes in the handle for pins. During this whole process I kept a container of water handy to cool off the steel, because it gets hot enough to burn you really fast.

To shape these sorts of three dimensional objects, my process is usually to start with only the two principal dimensions, cutting out the template and getting that as close as possible. After that, there’s usually a primary bevel, which I’ll try to do as geometrically as possible. Freeform curves are really hard to get just like you want, so I always go for sharp, defined angles, then smooth it all out at the end.

The main third dimension feature here is the taper on the blade. I made a point to try to switch sides frequently and keep it even. Honestly I mostly just eyeballed it. The angle grinder was pretty slow going, but the belt sander was pretty effective. A lot of people use hand files. Look up a Gough jig - that’s how to do this if you want ultimate precision. I was happy with what I got freehand, though.

Next up was heat treating. At first I went way off the rails on this one - people talk about building firebrick forges and all kind of stuff. I actually bought some ceramic fiber insulation to make a propane forge, then at some point I realized I could just use charcoal. I’d seen that at some point along the way, but at the time I didn’t have a place for outdoor fires.

Now I have a grill and a charcoal chimney, so I put a coat-hanger through the holes in the handles and buried the knives in charcoal in the chimney. Lump charcoal is supposed to burn hotter than briquettes, so that’s what I used, though I have no idea if it made a difference. I let that really get going, making sure there was ample airflow to the bottom of the chimney. I even used a hairdryer as a sort of bellows (just don’t tell my wife).

That got the fire going hot enough that the chimney itself started to glow red, and the blades inside were cherry red. I tested them with a magnet, and it didn’t stick, which indicates that it’s gone hot enough and it’s time to quench. 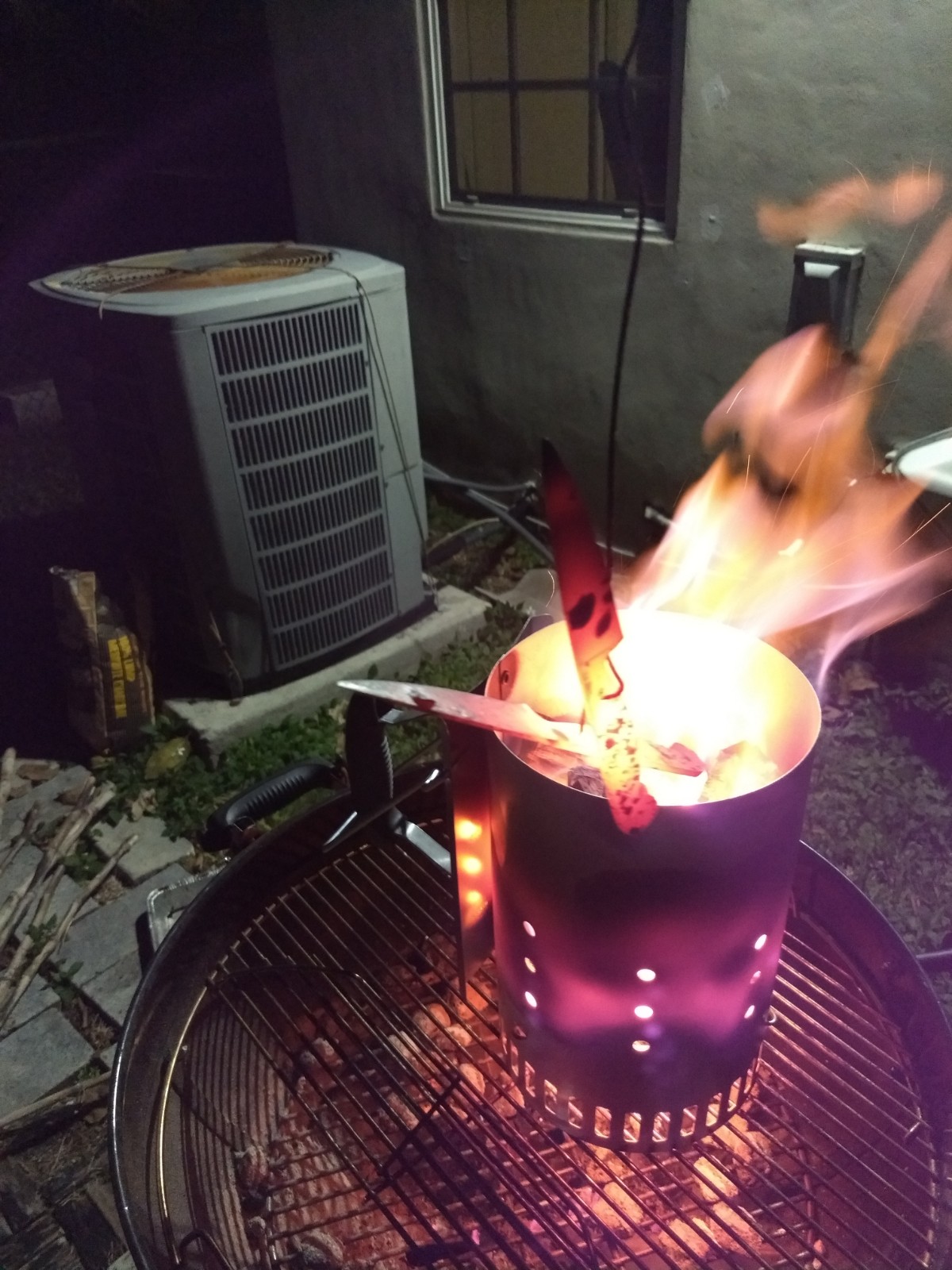 I then dunked them immediately in some oil to cool it down rapidly (canola oil in a bread pan, if you must know). This part varies depending on the metal, but my understanding is that if you dunked it in water, it’d vaporize quickly and violently, and you’d probably get hurt.

Here’s how they looked after that process. You can see that some scale has formed. 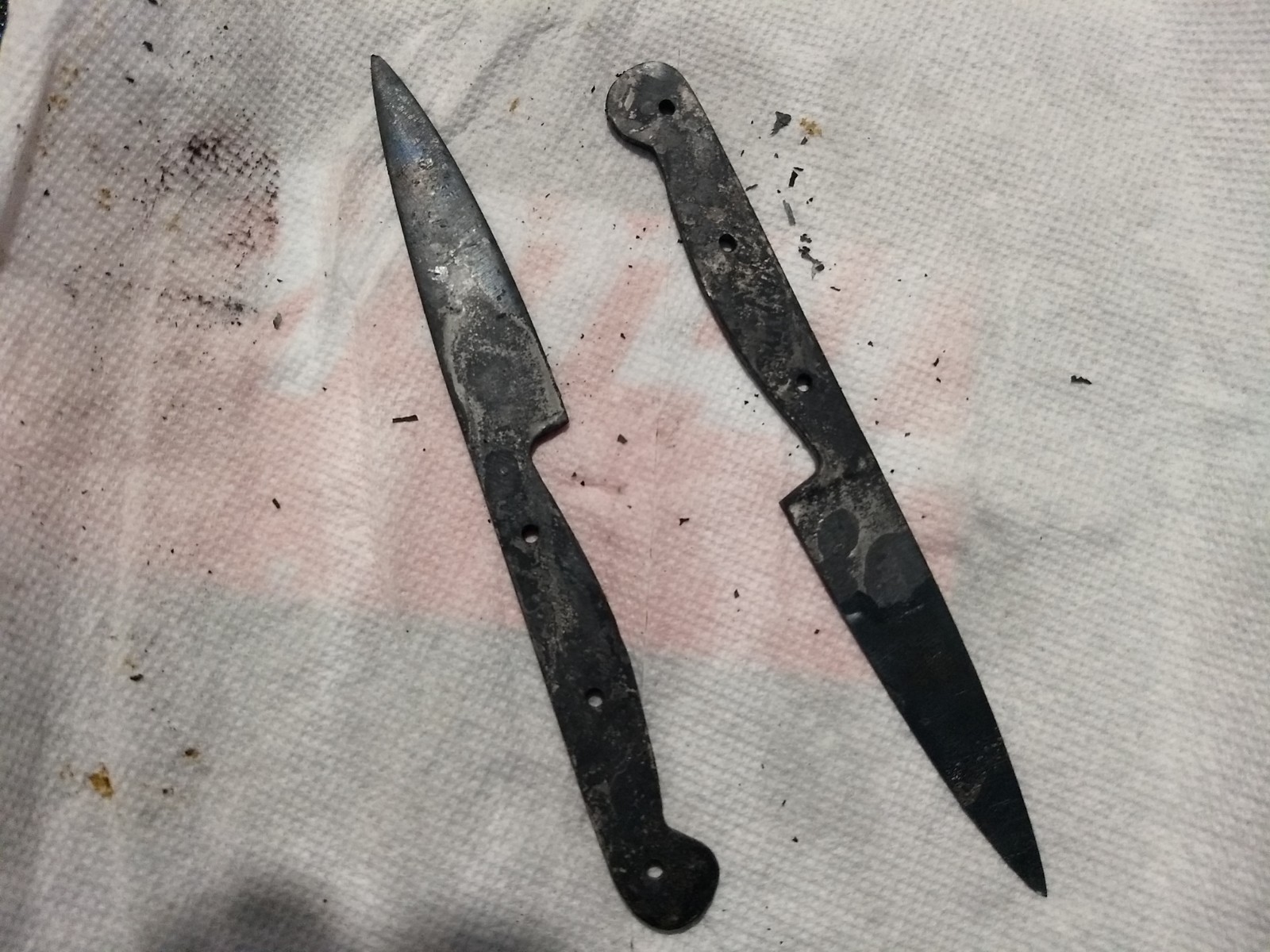 I sanded off that scale and brought it down to bare metal. At this point the blade is very hard. Too hard, actually - it’s brittle. If you dropped it, it might break (though I certainly wasn’t going to test that theory).

The next step in the process is to temper it, trading off some hardness for more durability. After some quick googling, I settled on 400F for 1 hour, then a slow cool to room temp, then repeat. I brought my toaster oven outside and stuck the knives in there.

After being tempered, the steel takes on a straw color: 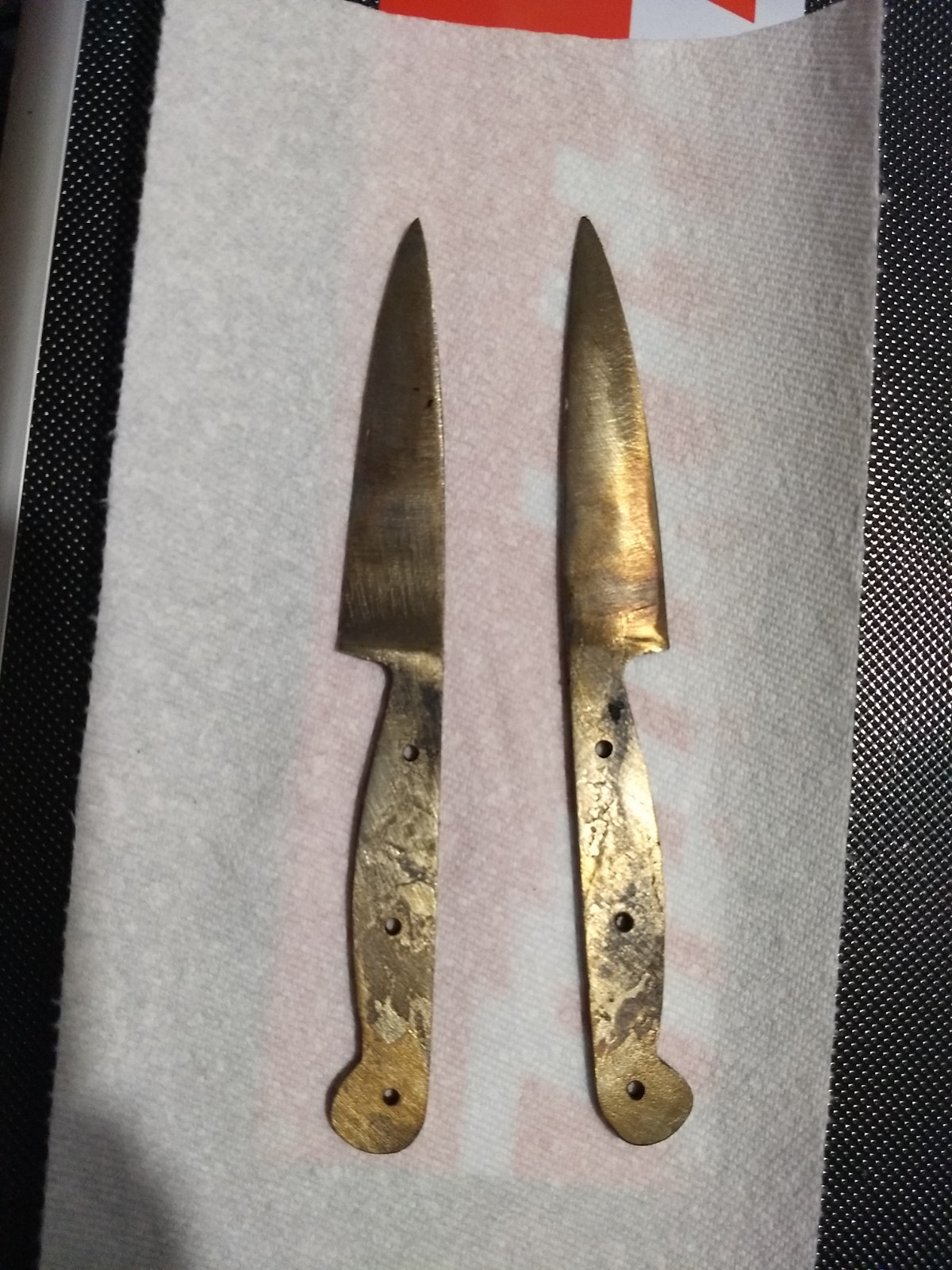 Next I sanded the steel a little smoother and began work on the handle. This type of knife has a full tang, meaning that the metal goes the whole perimeter of the knife. The handle is comprised of two “scales”, one on either side, held in place with glue and some pins.

I had some zebrawood lying around that looked gorgeous, so I very roughly shaped it and drilled some holes for the pins. I had bought a 1/8” brass rod from a hardware store which served that purpose. No idea what they sell those for. I judiciously epoxied all that in place: 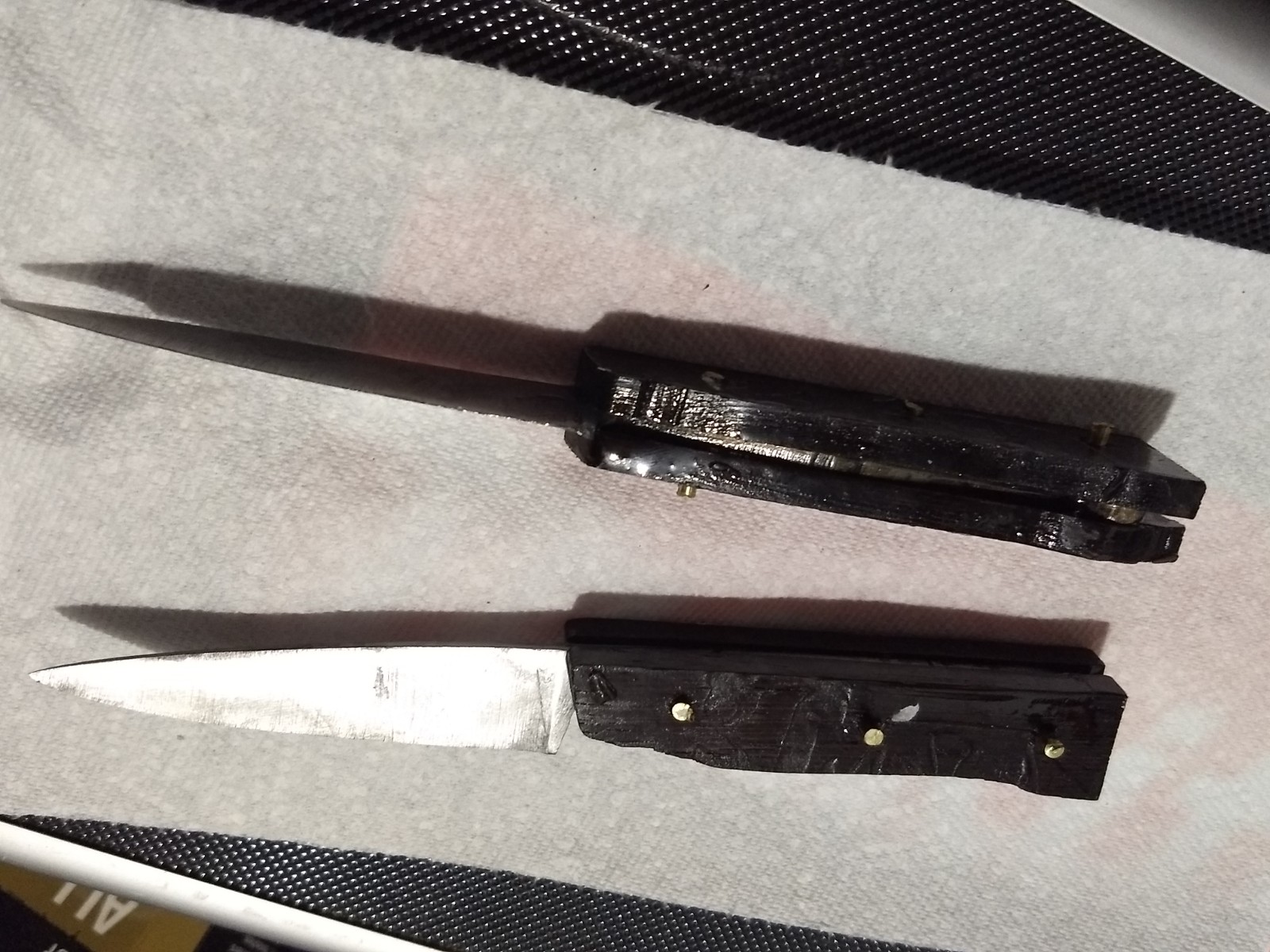 I ground that down to shape with sandpaper and some files (gotta get a rasp one of these days). I made the mistake of trying to use a router to start the process (keeping everything uniform), but I hadn’t tightened the base enough, and it slipped, digging in deeper than I intended… Eventually got something that looked pretty good, though.

I sealed the wood with spar varnish, which is what I had on hand. At some point in the process, the color contrast of the zebrawood got muddled out, so you can’t really see it anymore.

Lastly, I polished up the blade with progressive sanding and set an edge with whetstones. 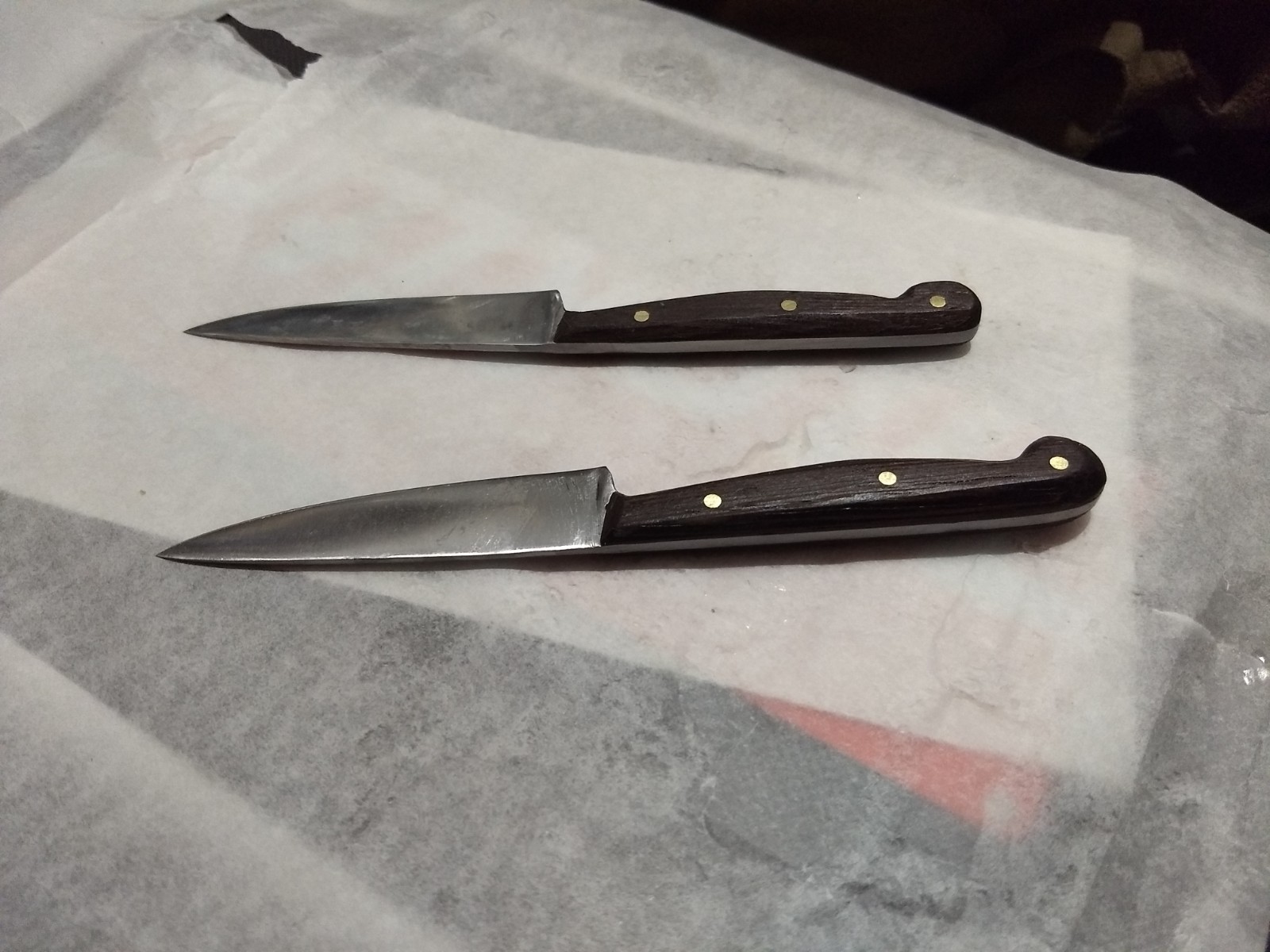 The knives feel great in my hand. As I mentioned, they now belong to friends, but I’ll hopefully check in on them in a couple years and see how they’ve held up.